This is just a brief post with plenty of pictures as a short memento of a fantastic holiday.  ‘Thank you’ to my friend Penny, who was an easy travelling companion, and to my Mum who gave me a generous enough cheque for my birthday that I could afford to go back to Club la Santa for the FOURTH time (I hardly ever go back to exactly the same place twice – there are too many other interesting places to explore, but I always have a fab. time at Club la Santa).  It had been refurbished and extended since I last went and is now really nice and modern – and the showers are fantastic!

We flew out of the UK on a day when there was snow on the ground.  The weather on Lanzarote was not perfect all week – it was very windy for cycling – and we even wore jeans (rather than dresses/skirts) some evenings, and fleeces – but it was as good as many a British summer and great to be outdoors exercising almost all day every day.  We agreed we should try something new every day so in addition to running, swimming and cycling we did:

By bike we cycled:

to the Fire Mountains (the visitor centre en route is great – and free – and I love the way it’s still so hot underfoot in the mountains themselves that dry brushwood will catch fire); 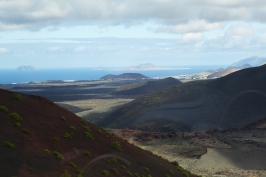 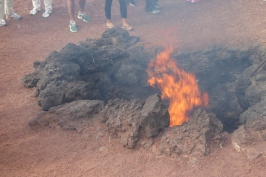 past Playa de Fumara, up to the Monumento al Campesino and then along a very bumpy road through La Geria to then head back down from Tinajo to Club la Santa; 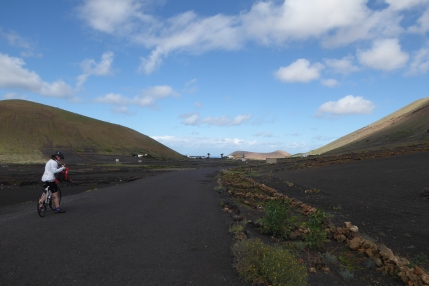 and up through Soo, Munique and Tiagua to Nazaret and a house that once belonged to Omar Shariff – Lag-Omar – but which is now a fascinating ‘museum’ come party venue (I think the guy trying to sell me some Aloe Vera products was also trying to chat me up… telling me that Aloe Vera would make me sexy and that I’d come back in two weeks and want to kiss him… hmm…).

I especially liked the way that many of the roads had ‘watch out for cyclists’ signs – I think it was only on the route of the Lanzarote Ironman, but shows how popular the island is for cyclists.  At 856 sq km there’s only really one ironman route available – as a comparison, Cumbria covers 6,768 sq km: but has a total of c.400,000 people to Lanzarote’s 139,000. Both of course have their populations boosted significantly by tourists – something which the Lanzarotians seem to welcome: they were all incredibly friendly and seemed delighted if you even spoke a couple of words in hesitating Spanish.

I’ve mentioned restaurants in a separate post. We were a bit disappointed by the ones at Club la Santa, other than La Plaza in the square (where we were served by a cute English waiter who was a bit of an Orlando Bloom look alike).  Restaurant Atlantico is great for enormous quantities of food; El Lago was disappointing for what it seemed to be trying to achieve, although they make a lovely gin and tonic.  Talking of gins and tonics, the Welsh barman in the Sports Bar was a bit of a gin expert and took ages creating two masterly gin and tonics – he likes Martin Miller, which is one I had come across, bought and particularly liked when I had a dinner party recently.

So it was a week of lovely weather and fresh air, exercise as well as relaxation, food and drink.  It was good for the mind and soul as well as the body, and I was a little sad to come home.  One day I would love to take the kids there, as I’m sure they’d enjoy it too. 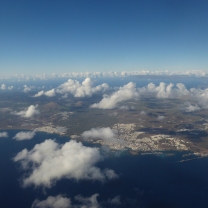 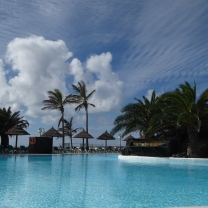 It was a weekend of memories.

I had volunteered to drive a friend from choir (Elaine) to her school reunion at St. Asaph in North Wales.  I hadn’t really looked at the map properly to check precisely where I was going, but I knew it was near enough Snowdon to walk up Britain’s third mountain, and when I asked my friend Penny if she’d like to come too she had said yes.

While Elaine and her school friends were busy walking down memory lane and visiting their former school, Penny and I headed towards Llanberis.  Last time I was there was not long after David and I had first started going out, when he had my car and, while I was in Switzerland, drove his brother to Llanberis to compete in a half-Ironman triathlon.  He had then driven to Heathrow to pick me up when I flew back in, and we had driven back to North Wales.  It was the first time I met his brother and I remember his (Jonathan’s) comment that the (half-marathon/thirteen mile) run at the end of the race was hard because it was so hilly: this was after swimming in the lake and a hilly bike ride.  We had driven back to Watford through the stunning scenery of the National Park, even though the A55/M56/M6 might have been quicker.

Penny and I decided to drive to Llanberis and walk up Snowdon from there, although she had previously done the Three Peaks challenge which starts at the Llanberis Pass and goes up the Pyg Trail (so called possibly because it was used to carry tar/pitch; or because of pigs; or because of the hotel whose initials are PYG).  The walk from Llanberis is the most gradual of the ascents of Snowdon and for a large part follows the line of the mountain railway ( which the mountain railway in the original Thomas the Tank Engine books is based on).  It’s about 9 miles there and back and estimated to take 3 hours up and 3 hours back, though we thought we ought to be able to do it more quickly.  After all we are both trail runners, even if I’m not a very fit one at the moment.

A coincidence was that as we drove into Llanberis we saw signs saying ’24 hour triathlon’; passed cyclists who were clearly competing in some event; and then saw people swimming in the lake: and I realised that it must have been almost exactly this weekend but all those years ago (14) that I was there with David.  On questioning some of the race officials however it was clear that this was no ‘ordinary’ half Ironman but a Brutal Event.  About 200 entrants were doing either a half-Ironman, a full Ironman or – heavens above – a DOUBLE IRONMAN!!!  (i.e. nearly 5 miles swimming, 220 miles on the bike and then 52 miles or so running): and whatever the distance the run involved going up from Llanberis to the summit of Snowdon and back again, as well as laps of the lake.  The race had started at 8 a.m. – when we arrived around 11 a.m. there were still swimmers in the lake, and the double entrants are still probably running as I write this on Sunday evening.

It whetted my appetite to do triathlon again, but not that sort of distance.  I would however like to try some of the Lakeland triathlons: partly as the scenery is so stunning and also because the run routes are normally off-road.

Walking up and down Snowdon was humbling in many ways.  It was incredibly busy (far busier than any Lake District fell I’ve ever been up) and many people were achieving something.  Obviously the triathletes were achieving something incredible, and I particularly respect those who were looking pretty worn out but who were still pushing themselves up the mountain, doubtless determined to get to the finish line.  But then there were also the heavier, less fit, people who were walking up because they wanted to, or because they wanted to raise some money for a charity they cared about.  There were teams of people urging each other on, delighted when they got to the summit, with matching charity t-shirts; there were individuals with labels on their bags because they were raising money for a heart-felt cause; there were fathers carrying small children in carriers on their backs; there were young children walking, holding a parent’s hand.  It was like Piccadilly Circus at the summit but everybody up there had achieved something, big or small (and the cafe sells the most enormous pasties I have ever seen – eating one of them was an achievement which neither of us even attempted).

We drove back through the National Park and Betws-y-Coed, a village which I remembered going to with David, Alex and Bella almost ten years ago, when Bella was just 3 months old and Alex was nearly 2, when we had been on holiday in North Wales.

It would have been lovely,  on getting back to our hotel, to have had a swim, but sadly the pool was closed for repairs.  So after showers and cups of tea Penny and I headed out into St Asaph city centre to The Bridge restaurant.  It is one of the best restaurants I have ever been to.  The service was friendly and efficient (the barman remembered us from the day before) and the food was superb.  I had a Salmon and Crab roulade and Penny had a Seafood Fricassee.  It made me sad all over again that Capernaum bistro has closed at home, as finding a restaurant with a decent fish menu isn’t always easy (and I definitely can’t go to North Wales every time I want to go out for a meal).

Having walked up and down Snowdon (it took us 2 hours up and 2 hours back – I would really have liked my trail shoes on for the descent so that I could have run some of it, and next time I do a mountain with a reasonable path to the top I might take my trail shoes in a back pack and change at the top) on Saturday, Sunday involved rather less ascent but we did go up and down the various towers of Conwy Castle and admired its fantastic location and views to surrounding countryside and down the estuary.  According to Penny’s FitBit we had done 27 floors, though obviously it depends how you define a floor.

It’s a brilliant castle and was another blast from the past as David and I had visited it with the children while on our North Wales holiday.  I couldn’t remember much about it, and I wondered whether I had been on the ground floor with a sleeping Bella in a buggy while David and Alex went around the walls: later on David confirmed that it had been so.  Much as I love my children and they enjoy looking round castles, it was good to have time to look around Conwy properly (and have time to read the signs without chasing after some child who is about to brain its sibling or fall over the edge of a wall).

Elaine and her friends had had a really enjoyable weekend and a bittersweet trip down memory lane, and I had loved being away.  Despite some gloriously sunny weather I was a little sad as I returned home.  I popped into David’s to see the children and give them the presents I had bought in Wales and have some hugs; the older two both then came round to my house for various things they need for the coming week; and I sorted everything out for my next travels.  My itchy-footedness only seems to have been stimulated by a weekend away, and I no longer feel as settled in Brampton as I used to: perhaps because there are things about it which make me sad now.  However… I am off to Italy tomorrow! 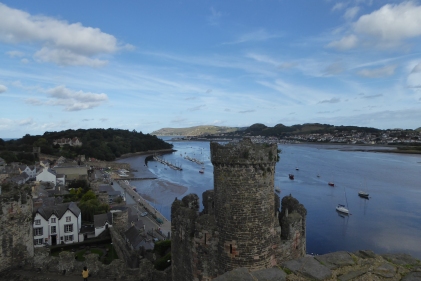