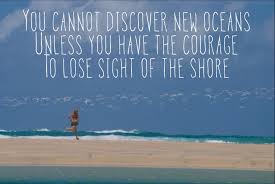 I’ve never really been one to stay in my comfort zone for too long: though people’s attitude to me has varied between ‘what the hell are you doing that for – are you an idiot?’ and ‘good for you’.  Funny, isn’t it – how people’s reactions to the things we do can be so diametrically opposed.  Just confirms that you have to do what your own heart/ head/ senses/ conscience tell you to do, not what other people think you should do, as some people will think you are right and some – probably, if it was analyzed, about 50% – will think you are wrong.

I can’t remember the first time I stepped outside my comfort zone and did something someone thought I shouldn’t, but I do remember my father saying something along the lines of daughters doing incomprehensible, rash things like switching to degree courses in subjects such as music.  I also remember a musical friend saying with surprise, about one of my music essays, “you sounded as if you knew what you were talking about – even though I knew you had no idea what a diminished 9th was” (actually, I might have known what a diminished 9th was – I probably looked it up purely for the purposes of the essay).

Later on of course I went for a safe-ish option and became a chartered surveyor.  At that point the unemployment rate for surveyors was very low, although to become chartered as a non-cognate graduate and as a woman (shock, horror – ‘they’ didn’t even approve of women wearing trousers to work when I began my surveying career in 1986!) was more unusual.  Someone from one of the long-established West End firms wrote in response to my job request, that they might have a job going managing their fleet cars – and that they (he) thought that often it was best if people ‘stuck to their own last’.

That sort of comment was, of course, guaranteed to make me stick to becoming a chartered surveyor rather than giving up – as with the guy who I had worked with previously who said what on earth made me think I’d stick to it when I’d stuck to nothing else work-wise up until then… what made me stick to it was that I had something to prove, not only to other people but also to myself.

After about 8 years in surveying I’d had enough however and decided to chuck it all in and go to work as a holiday rep., firstly in France (where I would have liked to have stayed) and then in Norway.  My father said “You’re not to give up a well-paid secure job to become a holiday rep.”.  Did I take any notice?  I had no mortgage, no children… and left a job paying £30,000 pa for one paying about £3,000 pa.  I had a great time and have seen bits of rural France that I shall probably never see again – and I could also speak fluent French when I got back.  My French is no longer fluent, but it gave me a confidence in speaking it which I think probably also helped with, later on, learning Italian.

I fell into a comfort zone after that though – my career progressed; I bought a flat; I earned (compared to my mortgage) a lot of money.  Then I met David, settled down, had children, moved to Cumbria… life was steady.

Or was it?  Don’t you think Life has a way of surprising you?  I am well aware that it really cannot be planned for – some things you wish for do indeed happen, but the effects of them are never quite what you expect and there are all the other things which happen which you didn’t even dream of (or the things you wished for happen, but turn out then to follow a different path from the one you’d expected or hoped for).

So there I was, plodding along, doing a job, taking redundancy as I hated the job and assumed I would just walk into another one as I always had… and I ended up pregnant, aged 48/49.  The creative side of me, which had been somewhat under wraps since graduating, had started rearing its head as well: I was singing and writing and started doing more of both.  The baby arrived, and provided a huge amount of joy and a fair amount of media interest.

Then my husband left.  After a few months of adjusting to it and having unexpectedly inherited a bit of money, I found I wanted to spread my wings and enjoy my new-found freedom and my 45% child-free time.   About a year later I got a job as a surveyor again, having thought I’d never go back to it, and had the most passionate and intense love affair of my life, with a guy who tapped right into the essence of me – the creative, free me which had been trying to escape the comfort zone for so long.

And now… after the pain (I still miss him); the acceptance (my kids have to come first) and the realisation (I am a creative person, and a people person)… I am about to step out of my comfort zone again.  I have a new job as a part-time chef, and am about to start a catering course in September.  Because of time restraints it is unlikely, come September, that I shall work as a surveyor again – after 30-odd years in the profession.

But, as I said in my college interview, I have 12 to 15 years of working life left.  I want, and intend, them to be enjoyable and (therefore) successful.  On an emotional level it feels as if I’m doing the right thing; on a practical level it also makes sense as there is far more demand for chefs than there is for surveyors and I have experience (e.g. in management and also in promotion) which is transferable.  I may go ‘backwards’ initially (in terms of starting again at the bottom, having to retrain, and not earning much) but it’s in order to go forwards more.  And the opportunities and openings are enormous – I wanted to live and work in France but didn’t manage it – becoming a chef my only restraint to where I work is my children.  There’s also a whole history to how I got to this stage, but it’s not necessarily relevant: suffice to say that when a friend suggested I get a job as a chef I mulled it over and eventually realised that she was talking a lot of sense and picking up on something which had been within me for a while.

She also suggested I start a supper club, so that’s exactly what I’ve done, with the profit going to charity.  If you feel like ‘sharing’ this and encouraging friends who live in or who are visiting Cumbria to come along, it would be great if you could – I would love to get really booked up.  And guess what… my new website also has a blog!

Creativity requires the courage to let go of certainties

One thought on “Comfort Zones”