I was having a debate with a friend the other day about relaxation in a city vs. being up a hill.  Once upon a time I would have been completely with her: a city break, particularly in one of the big, buzzy cities of the world, would have been one of my ideal get-away from it and unwind opportunities.

Or would it?  I loved living in London initially and even when we moved to Cumbria I missed the excitement and bustle of a city, and would regularly dash over to John Lewis in Newcastle for an urban fix.  But even so, as a child I used to enjoy standing at the top of a hill with the wind in my hair – I just didn’t do it very often.  As soon as I discovered skiing that became my annual holiday of choice; and it wasn’t long after that that I started mountain biking, then got fitter, improved my swimming, and began to enjoy outdoor activities which entailed being in hills and mountains rather than in a city.

It took me years to make the decision to move away from urban life, but as soon as it was made, when David and I decided to move to Cumbria, and we were in Cumbria, we knew it was the right decision.  I remember the first time we ran in Gelt Woods, and the rush of excitement and freedom – the closest thing you can get to flying without any mechanical assistance – of running down the hill near the motocross track, a view across to the Solway Plain.  Or putting the bins out on a dark starry night and looking across to the Solway Plain in the distance.  And then, standing on the Ridge one evening on my own, not long after we had moved into the house I am still in, and realising – putting into words in my head – that my soul felt right.  The Ridge, as anybody who has read any of my blogs even irregularly will know, is a special place for me – and for others too I think.  Perhaps the leylines which run through Lanercost also run along the Ridge?

So for me, standing at the top of a hill with my feet on the ground and my head in the sky is one of life’s relaxing, enriching and liberating experiences: and whilst I still love city breaks, probably my friend was right when she said I am a standing-at-the-top-of-a-hill type of a person.

I’ve done that a lot lately.  Mark from across the road,  my friend Penny and I had all entered the Howgills half marathon.  For anyone who doesn’t know, the Howgills are the fuzzy felt hills to the east of the M6 just south of Tebay.  Part of them is in Cumbria even though they lie completely within the Yorkshire Dales National Park.  I had wanted to go up into the Howgills for years, so a half marathon seemed, at the time I entered, a good idea…

We had a training run up Blencathra, a Lake District Fell which I have driven past in various directions many times and which I have seen change character with the seasons and the weather.  We didn’t – couldn’t – run much of the ascent but were rewarded by a glorious view of lakes and fells from the top.  We did run down, my love of descending giving wings to my feet.  I could hardly walk downstairs for two or three days after.

The following weekend we had a training run in the Howgills themselves, from Sedbergh.  Whilst many of the Lake District Fells are quite stony at the top (they are, after all, higher than the Howgills on the whole), these were beautiful grass-covered mounds, undulating invitingly for miles, just how they had looked from the motorway.  However although the route we chose did not climb as high as Blencathra, it was certainly as steep if not steeper and we began to wonder how we were going to get on in the race.  We weren’t going to be running uphill much. 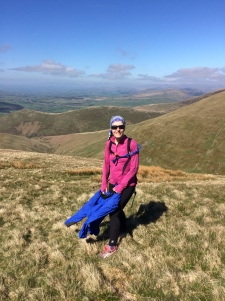 As it turned out, there were five miles or so of ascent in the race (at the beginning), followed by a steep but stunning and glorious descent down the side of the highest waterfall in England – Cautley Spout, 175m.  This all happened before the halfway mark, and the race organisers then put in another nasty little and incredibly steep hill only 2-3 miles before the end.  Even the ultra-fit marathon runner who came past me, saying ‘show the hill who’s boss’, didn’t run that bit.  The humorous organisers had put a sign up saying ‘it’s not a hill – it’s just the path is at an angle’ (or similar): although the motivational sign of theirs which really helped me was the one not too far before the end, as I was about to give up and sulk and walk all the way to the finish, which said ‘it’s not a knitting club – now push on!’.  How did they read my mind?!  It got me running again, all the way over the finish line.

And the next challenge?  I’m cycling the next stage of my round Cumbria bike ride – which I really must get on and write up, as well – including up and over Corney Fell.

I also know that I want to live at least halfway up a hill, with a good view from my house: if I can see the sea in the distance that would be great, but if not at least some rolling hills and fells and maybe a lake or a Tarn.  I’ll know when I find the right property.

One thought on “Up in the hills”