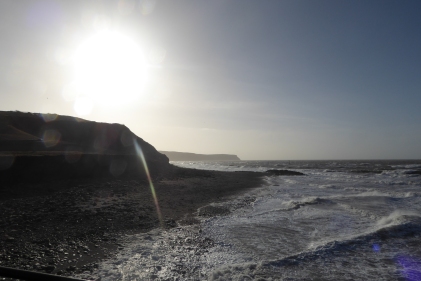 I enjoyed my drive to work in the SUV, but by lunchtime I had cabin fever and needed to get out.  The sea was calling to me once more, especially with the tail end of Storm Henry still hitting the coast.

I’ve discovered something I actually like about Whitehaven (apologies to anyone who loves the town: I don’t).  It’s the sea, particularly on a wild weather day.

I’ve started enjoying walking down to the far end of the harbour’s South Shore, out on to the West Pier where the outer harbour meets the sea.  You leave the calm waters of the inner harbour behind and stand there on top of the West Pier, waves crashing up and sometimes over the pier walls and against the shingle below.

I took the precaution today of leaning against a handrail as the wind turned my coat into a sail and tangled my hair: but I figured that death would come pretty quickly if you did accidentally fall in – your body would become rapidly hypothermic and you’d probably be knocked unconscious within moments, battered between the force of water and the solidity of land.

It struck me that the very physically elemental nature of this was what appealed to me: like running to the top of a hill and standing there gazing into the distance, the wind swirling around you; or great sex, or when singing or swimming feel good.  There’s an acute consciousness of the very guts of your physical being and yet an awareness of the spiritual or soulful as well: earth meets sky; mind, body and soul merge.

I reluctantly left the sea to walk back to the office – to the restrained heat and hushed atmosphere of indoors and paperwork.  But tomorrow I shall go down to the sea again.