Can anyone tell me the best free photo-editing software to use (without getting a virus on my computer)?  Since Helpful Teenager across the road has wiped my computer clean and reinstalled it for me – for which many, many thanks as I wouldn’t have had a clue – I no longer seem to have whatever software it was which let me crop photos… thought thank goodness I am no longer getting the really annoying pop-ups which kept popping up when I didn’t want them to.

I thought I could crop photos in wordpress too but can’t now find that option either… so my apologies to anyone who would rather they or their children were not in these photos, but my computer semi-literacy doesn’t enable me to edit.  Having said that I think Zoe’s face says it all about the Iron Maiden cake. Edward was found having a in-depth study of it on his own (and attempting to pick at the icing) before it came through to the party room for candle-lighting: he was clearly impressed. 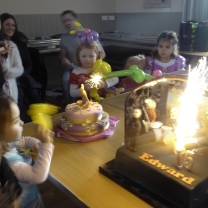 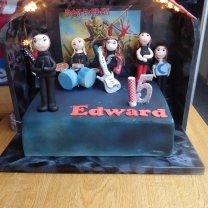 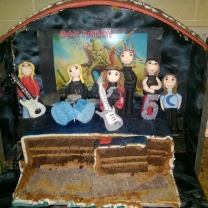 THANK YOU to Claire Houghton-Byers of Mama Cakes Cumbria for such a superb piece of baking artistry: see some of her amazing creations on Facebook and watch out for her new website, coming soon (copy writing by Yours Truly – beautifully graphically designed by Fabiana Graff (a thank you to Fabi for putting copy writing work my way: anyone else want a website, contact either Fabiana or me!).  Also Thank You to Claire Hunter (another artist – spot her exquisite painting of poenies) and gorgeous red-headed feisty daughter Kate for letting Edward have a joint party again; and to Silly Gilly for keeping 20-odd children so well entertained.

Meanwhile 10-year old daughter this morning tried to make pancakes for the first time ever.  Being an independently-minded child she didn’t want any help, and picked a lovely recipe from Tessa Kiros’ Apples for Jam (I have two of her lovely books.  I don’t use them very often but can’t bear to part with them as they are so attractively set out and a pleasure to read).  I’ve never found pancakes particularly easy – it’s taken me years of practice to end up with something which looks like a pancake rather than something which falls to bits.  Not surprisingly there was a bit of a tantrum in the kitchen… followed shortly thereafter by a further flare-up of frustration when the Spirograph didn’t behave itself.

Well, I might not be much good as a mother in many ways but I did manage to step in to rescue both the pancakes and the spirograph.  Now I’m off to plant a hedge in my garden.

Hedge only partially planted as I need to move the trampoline and then get a small digger (or a strong man with a fork) to dig up my back garden, as there’s a membrane just under the surface and I couldn’t get through it with the spade.  Abandoning the job for today, I went back in and before long it was time to get on with the roast dinner… I am so, so proud of my Yorkshire puddings (I was taught by a Yorkshireman… thank you Ant @ Capernaum!).  I think the new cooker helps too – I can actually see through the door – hence the photo where they look a bit like meringues! 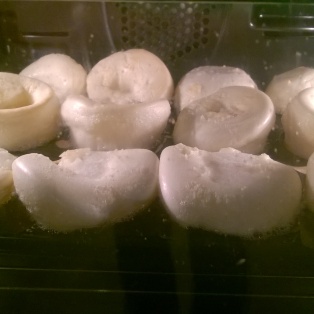 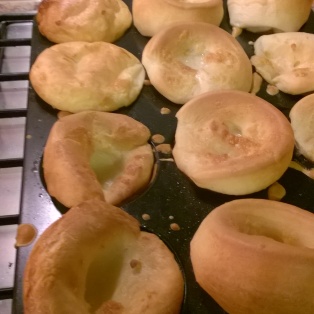 So that’s pancakes and Yorkshire puddings I’ve just about cracked… what next?

One thought on “Cookery”