Last week the weather finally improved. Driving to and from Whitehaven for work on Thursday was absolutely glorious – and at one point on my way in to Whitehaven there was a stunning view across the harbour to a white-horsed sea and the Isle of Man beyond, thickly and shimmeringly covered in pristine snow.

I had been feeling a lot calmer and more cheerful so had been back to the Doctor to ask how to come off the antidepressants. For almost a week now I have been on half the dosage I was on before, and on Thursday I even forgot to take one, I was in such a rush for work! I have far more energy and am able to concentrate better on things – I’m also eating normally, though I don’t seem to have put much weight back on (my ‘squidgy tummy’, as New Man would call it, is back though – probably because I’ve also been drinking a bit of wine without the adverse after effects I was getting (stinking headaches) before). I can also feel things more genuinely – it’s not as if everything is just supressed.

While in some ways this is bad – I can feel very sad and get very tearful – at the same time I’m glad to be able to feel normally again, and also I’m conscious that I feel sad/get upset rather than being depressed. In fact most of my life is going quite well and moving in the right direction: it’s just New Man who is causing me upset. We haven’t really been ‘together’ since I was first signed off and whilst he said he still adored me and wanted at least to be friends, at times he can appear quite unfriendly. As I’m trying to be friends and not expect anything else it can be rather hurtful, and the lack of communication is frustrating.  A couple of times I have been in floods of tears – and one time, having said I’d pick up a load of stuff for refugees from him, I chickened out and ‘ran away’ instead. Having had such a very, very passionate (and romantic) affair, and having been seemingly worshipped and adored by him, I’ve come to the conclusion that however much I love him and want him, I can only look after myself – concentrate on the things I’m progressing and make sure I don’t get further hurt. As they say, ‘if you love someone, let them go – if they’re yours they’ll come back’. Easier to say when you’re feeling calm than when you’re churned up though!

My singing is, as ever, a palliative though – as is my writing. I’ve just been asked to write a feature about Gelt Gladiator, which I also wrote about last year, and when I get around to doing some pitching I’m sure I’ll get some more commissions. Meanwhile I have got some music I’m meant to be learning off by heart, as well as practicing for the earlier part of the year’s forthcoming musical events. Yesterday I sang in a ‘scratch’ Messiah in St. Cuthberts, Carlisle. By mid-afternoon it was starting to snow quite heavily. When we left the city looked lovely with the fresh snow gleaming under the city lights – some of the Christmas lights were still up, which made the city centre sparklingly beautiful. As I drove up Brampton Road the snow, strangely, suddenly made me realise how many telephone or power lines cross the road – they showed up far more because of the layer of snow on them!

Today I went out for a run up on the Ridge – though I didn’t get up on to the Ridge but only the Moot, as the path up to the Ridge was slippery with hard-compacted snow and also I was running out of time. Loads of people were out enjoying the perfect weather – one even skiing. Wouldn’t it be great if that was the end of all the torrential rain (and flooding) we’ve been having? 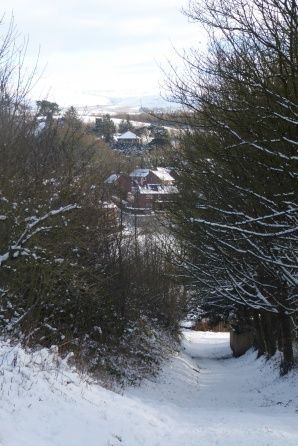