Last weekend I told the children I’d take them out for the day on Saturday.  Bella asked if Kath could come – Kath said yes and at 11 a.m. we all set out for Grasmere, somewhere I’ve been through before (including on foot during the Keswick to Barrow walk) but never stopped in.  I had originally said that we’d go to Ullswater to paddle and to have a picnic, but the weather wasn’t really lazing around picnicking type weather.

Instead I decided we’d go to Allan Bank (isn’t National Trust membership great!).  My cool box loaded with provisions (Kath and Bella having been sent out to get sausage rolls and a couple of salads from Cranstons), we started walking from the car park up the hill where Allan Bank sits overlooking the village.  I hadn’t really considered what an awkward shape the cool box is – especially when Edward is insisting on trying to help carry it – and in the end we took it in turns (Kath’s was probably the longest turn, to be fair) and found some rocks below the house which were perfect for picnicking.  Having made sure there was plenty of food, the children were more busy running around chasing each other and making friends with sheep – sigh. 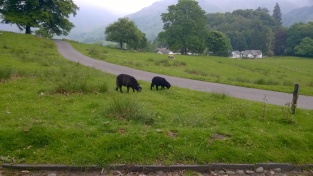 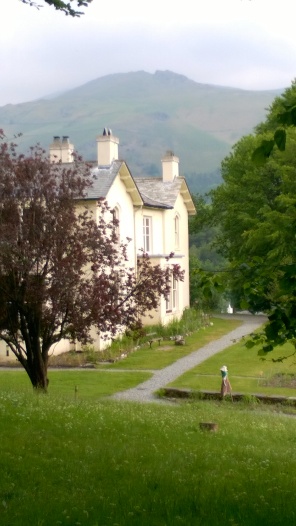 Allan Bank itself is probably one of the best NT properties for children, as there’s nothing much that they can break or wreck, though the staff did raise their eyebrows at Edward trying to take a toy motorbike up the stairs (fortunately the piano was locked).  There’s a playroom which is littered with all sorts of toys; Bella found a lady upstairs doing quilling, so happily sat and made a card; and Alex made his way into the art room, which has a lovely view of the lake, and drew a dragon.  I didn’t feel that I had to keep an eye on all three of them all of the time, so it was far more relaxing than many another historic property. 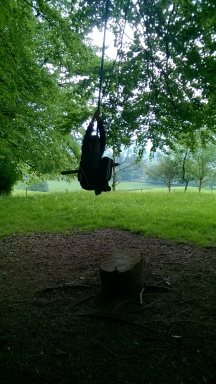 e boys soon wanted to head off outside to the swings and so forth, so whilst I went outdoors with them Kath continued to look around the house while Bella concentrated on her quilling. 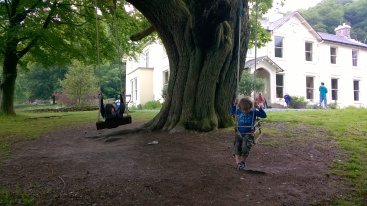 Having burnt up some energy and explored the games room and the viewing tunnel, the boys decided it was time to go.  Bella and Kath went off to get some Grasmere Gingerbread while Edward tried out Grasmere’s public toilets, and then we drove back via Keswick. 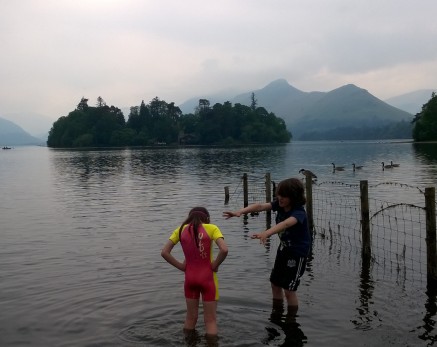 For Bella one of the main aims of the day had been to go swimming, and she was already wearing her swimsuit under her clothes and had packed a wetsuit.  There was no way she was going to be denied the pleasure of getting in a cold lake, so we parked by the Theatre by the Lake and – as Edward had fallen asleep in his car seat – left Kath to look after Edward while the others of us went for a paddle.  In fact it wasn’t as cold as I had anticipated, although I don’t think I would have got right in like Bella 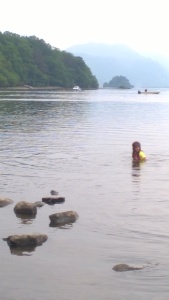 did (at least she did have a wetsuit on).  The mist over Catbells (I think it is) in the background looked lovely.

By the time we had finished Edward had woken up so we went into the Theatre by the Lake cafe for drinks and cake.  It was then time to go home, and we took one of our favourite routes back over Udale and Caldbeck Fells around the back of Blencathra.

The following Friday was Kath’s birthday and this time last year she and Will had only recently split up and she had had dinner with him.  With the anniversary of that coming round, and with my having just found out – through Bella – that David had a new girlfriend (far too soon to tell the kids, but there we go – that’s his choice), we decided that we’d see whether we could get to Honister Slate Mine on the Thursday afternoon (one of the afternoons at the moment when I don’t have work and don’t have the children).  We couldn’t try out the Via Ferrata but we would have time for a mine tour, so having met at my office we made our way once more to Keswick then through Borrowdale and up to Honister.

I’m not quite sure what I was expecting, although I had driven over the Honister Pass before and knew how bleak and rugged a landscape it is compared with the prettiness of Grasmere. 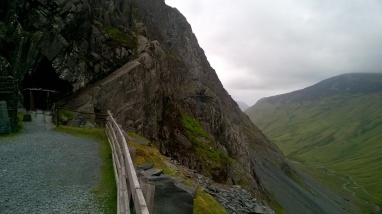 Going in to the mines you’re reminded what an extraordinary breed miners are, travailing underground for hours at a time, and of the dangers of mine working.  Roland, our guide, was full of interesting anecdotes: his family had worked for Lord Egremont, who at one time owned Honister mine and others.  I 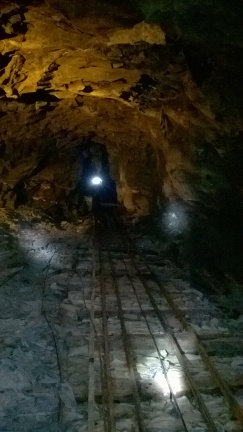 t struck me forcibly that if I had lived about 150 years ago, perhaps less, and was a miner, all three of my children would have been working down in the mines with me (or my husband, assuming I was a female 150 years ago).  The thought of any of them, but especially Edward at only 4 years old, working at all, let alone in those conditions and with the risks prevalent at the time, is sobering.

To the right is an internal incline used to cart slate up and down from one level to another: it reminded me of Foxton Incline Plane from when I worked at British Waterways.

The sobering nature of the tour and perhaps also the gloomy weather meant that travelling back Kath and I both felt, I think, a little emotional.  I took a route up through Mungrisdale and Hesket Newmarket, before dropping Kath off in Carlisle and heading home for Brampton.  However having thought I would have a quiet evening in doing some writing and ironing, I went to drop some posters off for a forthcoming concert and ended up having quite a sociable evening and getting home at about 11.30pm.

It just goes to show that you can never tell what is round the corner!